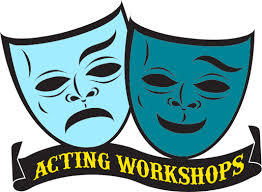 The Musical Theatre workshop is for actors in middle school, high school and up, and will be limited to the first 25 people to sign up. RhinoLeap’s stars of The Last 5 Years will be leading the workshop, which will focus on singing and dancing, with an emphasis on auditioning.

Ashley Robinson lives in New York City and has performed in musicals on Broadway and the West End in London. He recently appeared in the world premiere of Steve Martin’s Bright Star in San Diego and spent two years in the cast of Wicked in Chicago. Ashley has a BFA from the University of North Carolina School of the Arts.

Cameron Wade (Cathy) lives in Chapel Hill, NC. She has performed all over North America in the title role in Evita and has appeared on stages in New York City and North Carolina. As a choreographer, Cameron has worked in New York City, Charlotte, Raleigh as well as Forever Plaid for RhinoLeap in 2018. She has studied at Elon University, UNC-Charlotte and NYU.

Our other offering on February 1 is a Sound Workshop. This is for 10 people and you must be at least high school age to participate. The workshop will be held in the Sunset Theatre sound booth and will be led by Mark Dillon.

Mark Dillon’s performances defy classification. He has performed with the Chicago Symphony Orchestra, (on tenor banjo), premiered jazz pieces with trombone legend JJ Johnson. and busked his way around Ireland. He’s appeared on a Kerrville songwriters compilation with the likes of Steve Gillette, Kevin So, and Chuck Brodski. He has appeared as multi-instrumental musician and producer on 15+ CDs and in 2000 released his first solo album “A Certain Slant of Light” followed by “Apple Barn” in 2005. His stage show is known for its diversity ranging from the country tunes learned in his youth to the 12 string Middle Eastern slide pieces he is known to undertake when the mood seems appropriate.

The cost for either workshop is $25. Spots are on a first-come, first-served basis. Absolutely no spots will be held without payment.

We have two different sections that you need to fill out. Since we have limited spots in each workshop, the first form will keep track of how many campers are signed up for each workshop. If no spots are available for a workshop – a message stating that will be displayed.

You must fill out both forms and then continue on to make the payment. Your spot is not guaranteed until you have paid for the camp!


After completing the registration form, please send payment via PayPal’s secure transaction platform. Online payment is strongly preferred. If you prefer to pay in cash, please email rytcinfo@gmail.com no later than January 29th to make alternate payment plans. All payment must be received prior to the workshops with no exceptions.

Make sure to pick your workshop(s) below! If you wish to pay for more than one person to attend either or both of these workshops, you’ll be able to choose the number of registrations when you click on the “Buy Now” PayPal button.